skip to main | skip to sidebar

Whenever last September rolls around and the days start to get crisp something seems to sweep over the internet like a zombie plague. The pumpkin fever. This sickness can be summed up by this simple yet insightful meme. 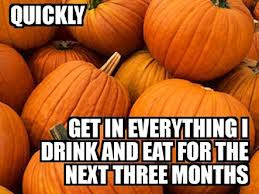 I must admit I'm a victim of the pumpkin fever myself. Most of my recipe testing has centered around pumpkin or pumpkin based products in the last few weeks. So brace yourself and make sure you're stocked up on can's of Libby's and jars of pumpkin pie spice. The fever doesn't usually pass until after Thanksgiving, when it's replaced by more zombie like activity, mall roaming.

The idea for this weeks recipe occurred to me while I was participating in the new national pass time of women, wasting time on Pinterest. I kept seeing recipes for pumpkin French toast casseroles. A little light bulb switched on in my head and I realized that if I made bread pudding with a loaf of Pepridge Farm pumpkin swirl bread it would up the pumpkin flavor. Here's the recipe that resulted 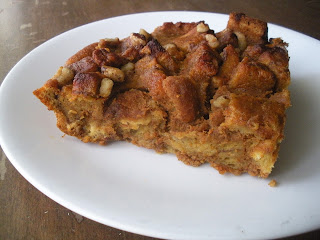 cube the loaf of bread and place in the oven on a cookie sheet to toast for 10-15 minutes.

While the bread is toasting whisk together the eggs, half and half , then add the sugars, spices, and vanilla. Once the mixture is combined whisk in the pumpkin until smooth.

Transfer the toasted bread to a 9 by 13 casserole dish. Lay the bread out in an even layer and pour the liquid over it and sprinkle the top with nuts. Bake for 30-45 minutes depending on how wet you like your bread pudding..

Posted by HereForTheFood at 9:32 AM

HereForTheFood
Follow me on twitter:@diamonds4brkfst I'm 22 years old and I'm a recent college graduate. I live in a very rural area of Virginia. My cooking style is comfort food for the most part but every once in a while I like to venture out of my comfort zone and try something fancy. I really just love feeding my family and my boy friend, and using food to bring together the people I love.